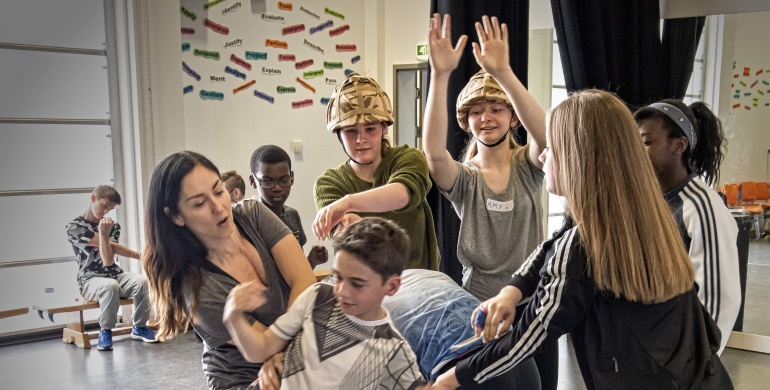 Whilst checking through learning tracks for our new People’s Opera Silver Birch at the kitchen table last night I was asked by my 9 year-old son: “who was involved in creating this opera?”

The question took me aback, as I was looking at the beautifully produced scores, listening to meticulously prepared learning tracks, emailing the cast, making decisions with the Creative Team, arranging to meet the conductor, re-tweeting the composer and re-reading the libretto. All in a month when we’ve started rehearsing with the local community who will bring their own experiences to bear on the work. There wasn’t a simple answer to his question: so many people have a stake in Silver Birch – and this makes it a wonderfully rewarding and particularly special commission.

In the last few months we have recruited an enthusiastic cast of over 180 people from many different walks of life, including men and women from the armed services community whose involvement has a critical relevance to the themes of the opera: a story about warfare and its impact on a modern family, told with reference to the iconic words of Siegfried Sassoon, a regular visitor to Garsington Manor. Most participants are from communities local to our home at Wormsley and are from all age-groups (8+), backgrounds and walks of life. Now that rehearsals have begun, we can really begin to hear and see this amazing new work come to life, drawing on the strengths of the community participants in a truly collaborative process with the Creative Team.

We have been working on various Learning & Participation projects focusing on the themes of the opera since the beginning of the year, to support the recruitment process. This included a return visit to the local charity Wycombe Women’s Aid (women supporting women against domestic violence) and a three-day project with one of our key partner schools, Cressex Community School. During these early projects, students from Cressex experimented with new sound worlds by creating some extraordinary acoustic effects for the battle scene in the opera, supported by Foley Artists from Pinewood Studios (our Sound Design team for Silver Birch). Some of this involved a lot of rusty old metal, used to create various aural effects, and also much euphoric high-pitched teenage screaming. We can’t wait for the Pinewood Studios team to get to Wormsley: “bring on the noise” was their parting shot. Fortunately the piece is so beautifully written, there is room for a wide variety of colours and effects; as the librettist Jessica Duchen so aptly puts it, the battle scene is where Roxanna, the composer (a little influenced in this scene by her DJ/Producing brother Jem Panufnik) really “let’s her hair down”!

At Easter we opened the doors at Cressex once again, this time for the newly-formed Youth Opera Company who came to experience the first three rehearsal days of Silver Birch. Aided by a good number of exciting props and with new vocal scores in hand, they raced through their main scenes in the opera – playing characters from the local housing estate, teenage army recruits, soldiers at war in the desert, and then at their homecoming. There was much training to be done, and they were put through their paces by Natasha, our choreographer, and Suzi, our vocal director. They next meet at the summer half term and in the mean-time have a chunk of learning tracks to work through, alongside their scores as an antidote to end of year exams; we wish them well!

Finally, we have just begun weekly rehearsals with over 50 children in our Primary Company, all aged 8-10, our four Child Soloists (playing the key roles of Chloe and Leo in the opera) and our Adult Company (who seem to have grown since we chose the rehearsal venue). The adults are an eclectic mix of those who have been with us on every project since Garsington Opera relocated to Wormsley, to those completely new to us this year, having heard about the project through our other projects, or via word of mouth in their communities. Regardless of how each of these wonderful people have become involved, they will all experience a miraculous journey of discovery as this work comes together; we can't wait to share it with them.

Have you booked your tickets yet?