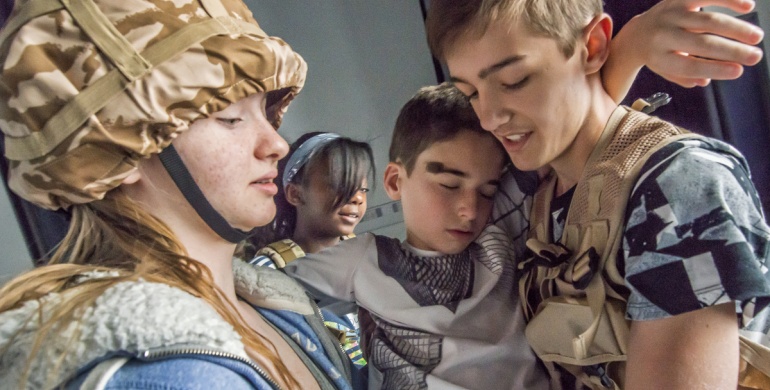 As part of our audition workshops for the community company of Silver Birch, we are delighted to welcome Military Community Company Manager, Gemma Holsgrove, who will be looking after members of the Armed Forces involved in the project.

There's a special pride in the work I do with the Armed Forces and the arts. Creativity, inspiration and expression can truly be tools of recovery for those suffering injuries and traumas both mental and physical. The arts can also be a means of gaining confidence and self-esteem which, when brought to the community level, bring like-minded people together to try new things and allow those in the civilian world to give back and grow, too.

The themes of Silver Birch are inspired by the poetry of Siegfried Sassoon (a regular visitor to Garsington Manor during the First World War) combined with contemporary experiences of soldiers and their families experiencing war today. Recruitment began in January and has seen Garsington Opera appear on BFBS (British Forces Broadcasting Service) and communicating information to military bases and charities in Buckinghamshire and beyond about what is on offer. The project is open to all from the Armed Forces Community: currently serving personnel, wounded, injured and sick Service personnel, veterans, Reservists, those transitioning from military to civilian life and Service family members (aged 16+).

We are thrilled to have members of the Armed Forces Community involved with Silver Birch. Given the subject matter of the opera, we felt it important to have the military community's voice heard. This is a unique opportunity to be part of a one-off production, meet new people and perform alongside a professional orchestra and singers. - Karen Gillingham, Creative Director, Learning and Participation

The next step for those interested in taking part is to contact Gemma and attend a workshop audition on Tuesday 21 March from 7-9.30pm. This will be an opportunity to meet the team behind the production and informally audition for the various roles in singing, acting, backstage and front of house.