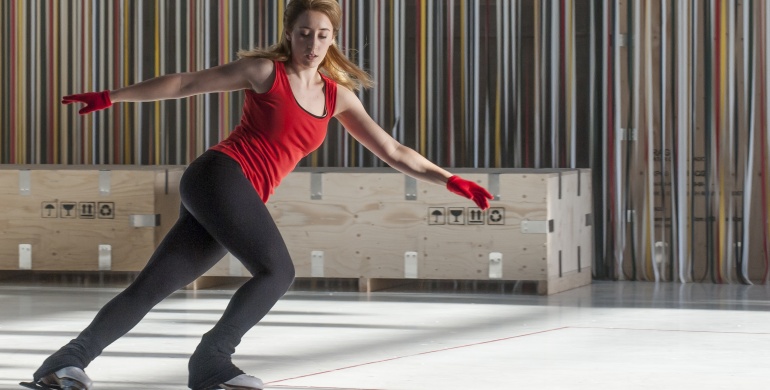 ★★★★
"...all the twists and pace of a TV thriller, matched with music equally direct and striking. It deserves many more outings."
Richard Morrison, The Times, 9 July 2018

★★★★
"An intriguing experiment in neo-noir that pays off handsomely."
Rupert Christiansen, The Telegraph, 6 July 2018

"How many other new operas keep the audience on the edge of their seats to the end?"
Richard Fairman, Financial Times, 6 July 2018

"The Skating Rink must surely have many future stagings to come."
Paul Levy, Arts Journal, 12 July 2018

★★★★★
"At the heart of this enthralling opera are unfailingly fine performances. The whole package is terrific."
Claudia Pritchard, Culture Whisper, 6 July 2018

"It's a gold medal from me for this fine piece of British choreography."
Scarlett Roitman, Diary of a Londoness, 12 July 2018

"The ensemble, as a whole, were brilliant in their singing and their movement."
Katy Hammond, Daily Info, 10 July 2018

"Poetry in motion. The opera is ideally cast and the quality of the singing is excellent."
John Burleigh, Henley Standard, 23 July 2018

"An intriguing story, told by a superb cast of voices. I was gripped from beginning to end."
Cindy Burrowes, Henley LIfe, 1 August 2018

"A lot of the confidence came from the conducting of Garry Walker. It was masterly."
Roderic Dunnett, Music and Vision, 24 July 2018

"It is a vibrant and energetic score, with some beautiful more contemplative moments, and well served by an earthy libretto by Rory Mullarkey.
Keith Clarke, Classical Music, 1 August 2018

"There was not a single weak link in an excellent cast of singer-actors."
Jonathan Cross, Opera, 1 September 2018

"One of the most sheerly enjoyable and touching British Falstaffs of recent years."
Hugh Canning, The Sunday Times, 1 July 2018

★★★★★
"There's no better way to spend a summer's evening. This is an ensemble that seems to have been together for years."
Richard Morrison, The Times, 20 June 2018

"This is the best rendering I have ever heard. Henry Waddington's Falstaff is a beautifully crafted character. A bright and glittering performance from Garsington."
Louise Lewis, ​British Theatre Guide, 23 June 2018

"Garsington is shown at the very top of its game in a sensational new production that sounds wonderful, looks brilliant and provides perfect entertainment for a lovely summer evening."
Christopher Gray, The Oxford Times, 28 June 2018

★★★★
"A very entertaining evening and a delight for those new to opera."
Nick Wayne, Pocketsize Theatre, 27 June 2018

★★★★★
"It was glorious. An evening of beautifully constructed, overt comedy featuring an elite cast of exceptionally talented artists."
Helen McWilliams, Entertainment Views, 17 June 2018

"A triumph for the company and all concerned."
George Smart, Town and Country, 26 June 2018

"Garsington Opera is shown at the very top of its game in a sensational new production that sounds wonderful, looks brilliant and provides perfect entertainment for a lovely summer evening."
Chris Gray, Oxford Mail, 29 June 2018

"A jubilant example of Garsington at its best."
Rebecca Lipkin, The Arbuturian, 9 July 2018

"An opera that should pulse with life from beginning to end; this production achieves that admirably."
Curtis Rogers, Seen and Heard, 21 June 2018

"Miah Persson gives one of the most detailed and nuanced acting performances of any singer of the past decade or more...this is a near-immaculate assumption. This Capriccio confirms Garsington's status as the best country-house opera address after Glyndebourne."
Hugh Canning, The Sunday Times, 10 June 2018

★★★★★
"Tim Albery's delicious staging. There was no weak link. The great coup was the Countess herself...singing the role with beauty of tone, subtlety of vocal colour and that ideal, Straussian blend of wit, consternation and wisdom."
Fiona Maddocks, The Observer, 10 June 2018

★★★★
"Persson sings the part of the Countess with Mozartian grace and purity of line...that finale is a proper showstopper."
Neil Fisher, The Times, 5 June 2018

★★★★
"Miah Persson is superb. The Swedish soprano sings with a voice of pearl and gold. A final scene in which we glimpse Straussian heaven."
Hugo Shirley, Financial Times, 4 June 2018

★★★★
"Miah Persson is the acme of sophistication as the Countess, singing with all the silvery grace that Strauss adored. Douglas Boyd conducts a sumptuous account of the music."
Rupert Christiansen, The Telegraph, 2 June 2018

"A perfectly judged new production. In Miah Persson we get an ideal Countess."
Michael Church, The Independent, 4 June 2018

"Garsington makes as good a case as you can for Strauss's frothy Capriccio. Douglas Boyd showed himself to be a fine Straussian. In particular he made the Moonlight Music as it needs to be: achingly lovely, so that one longs for more, but is rightly denied it."
Michael Tanner, The Spectator, 8 June 2018

★★★★★
"This is world-class singing. Miah Persson is commanding, graceful and luminous of tone throughout. An exquistitely staged and sung production."
Claudia Pritchard, Culture Whisper, 2 June 2018

"A beautiful production by Tim Albery. Miah Persson sailed sweetly and swiftly through the conversational snatches and soared through Strauss's expansive arcs with a blend of silvery limpidity and golden gleam."
Claire Seymour, Opera Today, 3 June 2018

★★★★★
"Featuring a Countess who is surely destined to be the Strauss soprano of our time."
Melanie Eskenazi, Music OMH, 26 June 2018

★★★★
"From the opening sextet to the dreamy horn solo in the 'Moonlight' music, the playing is big on detail and style, as indeed is the whole, impeccable evening."
Peter Reed, Classical Source, 2 June 2018

"The star of the evening was Miah Persson...she has a wonderfully rich liquid-like voice. A great achievement, and a perfect evening."
Mike Proudfoot, Daily Information, 1 June 2018

"Albery's production is a witty interpreation, which gets even better in the second half."
Louise Lewis, British Theatre Guide, 1 June 2018

★★★★
"Miah Persson is at the top of her game and supplies a sensational performance. Under the baton of Douglas Boyd, this is a musical joy."
Christopher Gray, The Oxford Times, 7 June 2018

"The star of this performance was Miah Persson. Her Countess was made perfctly."
Dr Jacek Kornak, Cooltura, 24 June 2018

"There were many musical rewards to enjoy. That was true above all for Persson."
Mark Berry, Seen and Heard, 13 June 2018

★★★★
"A clever new Mozart staging. Best of all is Louise Alder as Pamina. She is a rising star and you can easily see why."
Richard Morrison, The Times, 4 June 2018

"Plenty of laughs, it's stylish and inventive, and the cast is strong. This is a clever production."
Michael Church, The Independent, 1 June 2018

"This is a smashing cast: fresh-sounding, and each bringing slightly more to the table, vocally, than you necessarily expect with a Zauberflöte."
Richard Bratby, The Spectator, 9 June 2018

★★★
"One of the handsomest productions we've ever seen in this auditorium. This is as strong a cast as Garsington has ever fielded."
Alexandra Coghlan, theartsdesk.com, 1 June 2018

"Beautifully exectued both visually and acoustically."
Scarlett Roitman, Diary of a Londoness, 7 June 2018

"This production is a must-see. It is both fresh and different and visually satisfying."
Amanda Sadler, Henley Standard, 18 June 2018

"Louise Alder is one of those sopranos who is worth a trip to the countryside to discover a voice of velvety density, clarity of articulation and firmness of steel in the long phrases."
Augustín Blanco Bazán, mundoclasico.com, 27 July 2018