Opera for All: Summer Update 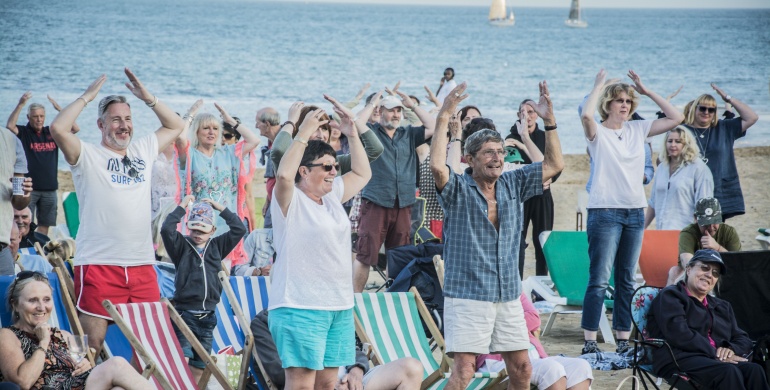 Amidst high summer sun and balmy evenings, as well as torrential downpours and MET office weather warnings, our Opera for All programme has seen a wonderful and eventful summer of open air activity.

SO Festival 2 July
The SO Festival is Lincolnshire's most exciting, innovative and accessible outdoor arts festival, where we presented our first big screen relay of this year's acclaimed Eugene Onegin. As well as the free screening, there was a free performance by young people from three local secondary schools, the culmination of two weeks of workshops exploring the themes and music of the opera. Groups created their own work, challenged with new avenues for the story and characters. This platform for young performers in Skegness was a showstopper and a sparkling example of the value of creative learning, for both participants and audience. Our team of professional artists also led a series of teacher workshops and primary school sessions in the area.

Ramsgate Festival 11 July
A few weeks later we were on the beach in Ramsgate, opening the fesitval with a whole day of opera activity. Music and craft workshops ran throughout the day alongside pop-up street performance and short clips of the production narrated by our artistic team. As the sun went down, a crowd of over 500 people gathered to enjoy the big screen relay; a perfect setting for the epic tale which lit up the beach for the remainder of the evening.

In the build-up to the day, a group of community performers immersed themselves in the opera, creating the pop-up performance with our team of artists. To see them in action outside cafés and through the streets was wonderful as they sang alongside our two professional singers and our accordionist Eddie Hession.

Burnham-on-Sea and Bridgewater 16-20 August
With the summer holidays in full swing our activity in Bridgewater was focussed on working with local families and young people. We introduced groups to practical theatre skills, creative music-making and vocal technique, all centred around the themes of Eugene Onegin ahead of the screening. Holiday-makers and local residents alike were also treated to 'opera busking' along the esplanade in Burnham-on-Sea, providing a live taster of the opera throughout the area.

Sadly the good old British weather took a change for the worse and the screening was postponed until the autumn for everyone's safety.

Still to come...
Folllowing such a busy summer of activity we are now looking forward to even more school engagement in each region over the next couple of months, alongside our rescheduled screening in Burnham-on-Sea in November.