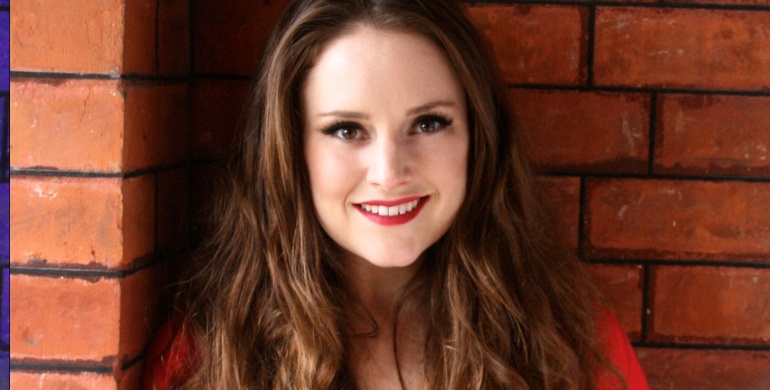 We are delighted to hear that soprano Louise Alder is Opera Now Magazine's Artist of the Month. She performs the role of Ilia in Idomeneo for Garsington Opera's 2016 Season.

Louise Alder’s gorgeous lyric soprano voice along with her keen intelligence and poise as a performer have brought her to the attention of some of the world’s leading opera companies. She talks to Andrew Green about her plans for a summer of Mozart opera in the heart of the English countryside

There are no surprises about Louise Alder’s choice of career: her father is a singer and her mother a Baroque violinist. Growing up in southwest London, she duly started out playing the violin and has now developed a blossoming career as a ne lyric soprano, with major opera houses in Britain and abroad knocking at her door. Formative experiences in the audience at Glyndebourne and Covent Garden (supporting her baritone father, Stephen Alder, in his chorus appearances) embedded a fascination for the stage, which then ourished alongside academic music studies at Edinburgh University.

‘Edinburgh is a fabulous centre for the creative arts,’ enthuses Alder. ‘I threw myself not just into opera but also into music theatre and straight theatre. It made me aware of what opera and music theatre should be about – conveying something that’s realistic and deeply felt. It requires you to be completely inside what you’re singing about.’

At Edinburgh, Alder also had the good fortune to find a singing teacher, Patricia MacMahon, a doyenne of the vocal faculty of Royal Scottish Academy of Music where she taught for 40 years. This was the ‘right person at the right time’ that any ambitious young singer pines for. ‘Although I did loads of singing at school, I had no technique. Meeting Pat changed all that. Apart from anything else, she taught me such a love of singing – it’s as simple as that. Without her, I’d never have been able to go on and study at the Royal College of Music with Dinah Harris, to whom I’m also hugely in debt.’

Milestones along the way since RCM days have included the winning of the 2014 Glyndebourne John Christie Award and second prize in the 2013 Kathleen Ferrier Award contest. Alder has also secured representation by one of Europe’s most prestigious artist managements,Askonas Holt.The Royal Opera, Glyndebourne and Welsh National Opera have been swift to recognise her talents too. In Europe, meanwhile, she joined the ensemble at Frankfurt Opera in 2014 and recently appeared as Rapunzel (Sondheim’s Into the Woods) at the Châtelet in Paris. Concert and recital appearances include engagements with a string of leading UK orchestras and visits to Austria, Russia, Hungary and Romania.

Two formative moments in this fast-developing career live vividly in Alder’s memory. The first, as Sophie in Der Rosenkavalier with Glyndebourne Opera at the BBC Proms in 2014, Robin Ticciati conducting the London Philharmonic Orchestra:‘So many debuts that evening – with Glyndebourne and the LPO, plus my first Sophie, first Prom and first Radio 3 broadcast! I went to Munich for coaching and felt incredibly well-prepared and wonderfully calm. I loved singing Sophie... she completely inhabited my brain.’

Then there was Alder’s appearance as a competitor for the Chilcott Award for singers, where she had to make an impression in front of a distinguished jury, in spite of being ill on the day: ‘I was lucky. The general director of Frankfurt Opera, Bernd Loebe, was one of the judges. He liked what he heard from me enough to invite me to audition. The upshot is that Frankfurt has become such an important factor in my development’.

Luck was, of course, only the start of it. Bernd Loebe clearly recognised a gorgeous instrument that combines unaffected purity and warmth with heart-stopping dramatic intensity and a real instinct for the stage. The 2015/16 Frankfurt season alone has seen Alder in roles ranging from Handel’s Cleopatra, Figaro’s Susanna and Gretel to Sophie (Der Rosenkavalier), Suor Genovie a (Suor Angelica), plus Juliette Vermont and Vixen Sharp Ears in new productions of Der Graf von Luxemburg and The Cunning LittleVixen respectively.

This summer, she makes her debut with Garsington Opera as Ilia in a new production by Tim Albery of Mozart’s Idomeneo, amid the bewitching surroundings of the Wormsley Estate in Buckinghamshire. Alder already knows the setting well: ‘It’s a magical place... the English countryside personified, with its lake and parkland. The opera pavilion is amazing – such a beautiful design, with transparent sides allowing a view out into the gardens. Ilia is a great character to get your teeth into, and singing Mozart is a total joy. For a young voice, his music is a form of vocal medicine – tricky to master but so rewarding in terms of training. We have a fantastic production team at Garsington and I’m very excited to be singing alongside Toby Spence, who’s cast as Idomeneo.’

The coming months will see Alder’s talents exhibited in several new releases, among them the DVD of Glyndebourne’s Rape of Lucretia and CDs of Frankfurt Opera’s Der Graf von Luxemburg and L’Orontea. Added to which come Wolf songs on CD with pianist Sholto Kynoch, a product of Alder’s appearance at the Oxford Lieder Festival. As her career develops, Alder looks forward to having an increasing amount of choice over the roles she takes on. ‘I’ve told my manager, Keiron Cooke, that I’ll always be keen to take on music theatre roles.The dream is to have a combination of music theatre and opera.’

Alder knows all about combining choice ingredients. Baking is a consuming spare-time hobby: ‘I enjoy making anything – but I guess birthday cakes especially. I wouldn’t claim they always look the best, but they taste great!’