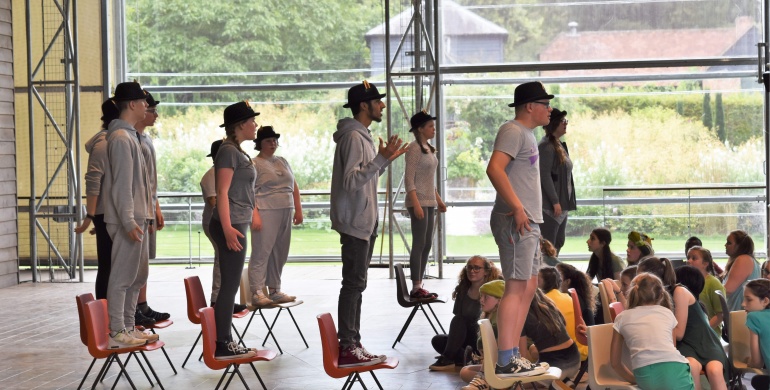 The Garsington Youth Opera Company had a successful week rehearsing and performing in early August at Wormsley and, more recently, had the opportunity to perform in London's Covent Garden. We asked our Learning & Participation Coordinator, Julian Guidera, for an update.

Garsington Opera's Youth Opera Company were invited to take part in the Royal Opera House's Out Loud Festival on Sunday 4 September - performing John Barber's Mighty Oaks Academy on a pop-up stage in the Covent Garden Piazza. The event was a showcase of song from opera to pop - performed by professional and non-professional singers - and gave visitors to Covent Garden a chance to experience the power of singing through exceptional up-close performance and participation.

This was an exciting opportunity for our Youth Opera participants to continue their musical, dramatic and social development in a new setting. The performances were directed by Ruth Mariner and conducted by Karin Hendrickson.

This followed an energetic week in August when they joined forces with a Youth Orchestra (formed by Buckinghamshire Learning Trust Music) to perform on Garsington Opera's main stage at Wormsley to an audience of family and friends. The performance was extremely well-received and included an enticing preview of Silver Birch, our 2017 People's Opera. They performed the opening chorus of the piece and many of them will return to take part in the 180 strong cast of all ages.

Karin Hendrickson, who conducted the performance, said, "I was very happy to work with the Youth Opera Company on this project. We find that by treating the students like professionals, with high expectations, they deliver more than they expect even of themselves!"

"I had a great time, met a lot of new people and experienced things I couldn't have done otherwise. I would hugely recommend this experience to other people." - Youth Opera member

"I really enjoyed playing in the pit at Garsington!" - Youth Orchestra member