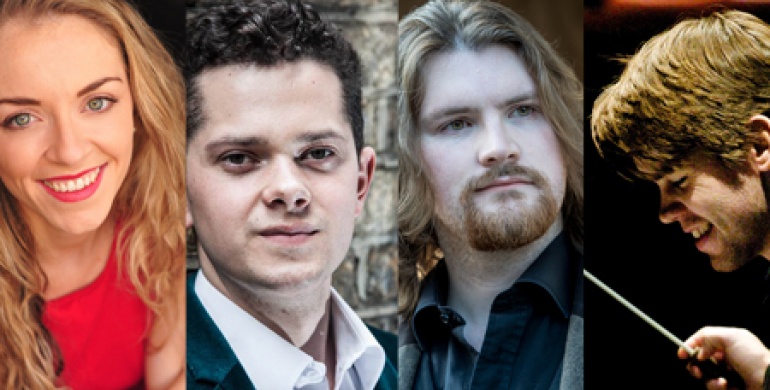 We are delighted to announce the winners of this year's two prestigious Leonard Ingrams Foundation Awards as well as the Helen Clarke Award and Simon Sandbach Award. We spoke to the three singers, who were all involved in our Alvarez Young Artists' Programme, as well as conductor Jack Ridley who was Assistant Conductor for Eugene Onegin.

These prestigious awards provide a bursary to support, encourage and nurture the most outstanding young artists involved our previous opera season. These Awards are made by the Foundation in memory of Garsington Opera's founder, Leonard Ingrams, to ensure the continuity of his vision for which discovering and offering opportunities to talented young artists was a central and important strategy.

This year both Benjamin and Jack excelled in the OperaFirst performance of Eugene Onegin, when the entire understudy cast performed the full length opera to an auditorium full of school children who had prepared for their visit through workshops with our incredible Learning & Participation team.

Benjamin Lewis
Understudy - Eugene Onegin, Eugene Onegin
I am enormously flattered and grateful to be given the Leonard Ingrams Award, which will provide invaluable financial support for my continued studies at the National Opera Studio, allow me to audition in places I would not otherwise be able to afford to go, and continue to increase my proficiency with languages which will be essential if I am to further my career in opera both in the UK and abroad.

Jack Ridley
Assistant Conductor - Eugene Onegin
It's a huge privilege to receive the Leonard Ingrams Award after spending a wonderful and rewarding summer working at Garsington. This award will be of great value to my professional development, enabling me to afford to buy scores and travel abroad for research, masterclasses and auditions.

Recipients of these awards are rising young artists who are recognised for their extraordinary talent, musical skill and contribution to the 2016 Garsington Opera productions.

Lauren Zolezzi
Understudy - Ilia, Idomeneo
To receive coaching from Susanna Stranders, attend talks and masterclasses with industry professionals as well as spend time on an idyllic estate in Oxfordshire, was a wonderful experience.  Support like this award for young singers is a lifeline as it is tricky to make ends meet at the beginning of a singing career.

James Way
Understudy - Monsieur Triquet, Eugene Onegin
This year was my second year on the Alvarez Young Artists’ Programme.  The opportunity that the understudies were given by performing Eugene Onegin  on stage, with full orchestra, sets and costumes, as part of the OperaFirst programme was  a highlight of the season for me. The reception the show received from the auditorium full of enraptured school children is something I’ll never forget. I’m thrilled to have been awarded the Simon Sandbach Award.

We look forward to welcoming back James Way in 2017 when he returns to sing a principal role in Roxanna Panufnik's Silver Birch, and both Jack Ridley and Lauren Zolezzi will take part in the 2018 season.