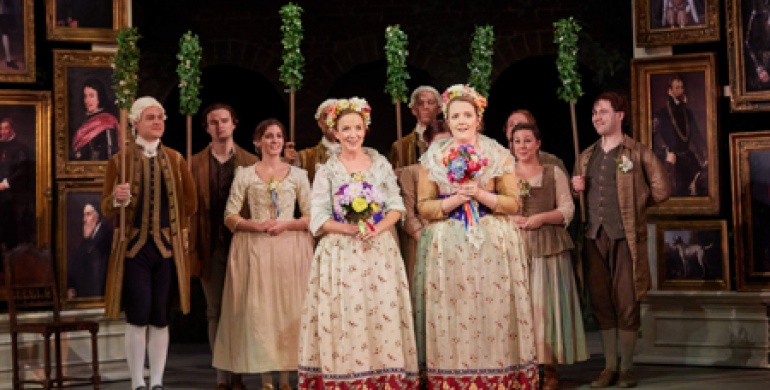 The Alvarez Young Artists' Programme was founded in 2014 with the generous support of the Alvarez family. Each year from hundreds of applications we select a group of young singers who experience an incredibly varied range of opportunities during the Garsington Opera season.

This year has seen more activity than ever for the young artists, including performances of Le nozze di Figaro in very different locations, working as chorus, covers, in small roles and performing solo recitals. As part of the understudy scheme the artists observe the principals in rehearsal and work closely with the creative teams to prepare them should they have to step in at the last moment and cover a major role, something which Joseph Padfield had to do as Golaud for a performance of Pelléas et Mélisande.

As part of the build-up to the season Garsington presents Insight Talks for each production in Oxford and London including the performance of short extracts by some of the understudies. During April and May, Charlotte Beament (Semele), Jon Stainsby (Figaro), Johnny Herford and Margo Arsane (Pelléas and Mélisande) and Nazan Fikret (Fiorilla) performed during the events at Oxford University and in London and were also given the opportunity to offer their own insights into the operas.

The 2017 Season saw the introduction of short recitals in the stunning Green Theatre in the Walled Garden at Wormsley. Each Saturday before the main performance two young singers performed arias with Susanna Stranders at the piano, a chance for them to explore new repertoire with one of the country's finest coaches, and shine as solo artists.

At the end of June, the understudies of all four operas presented a showcase evening in London to an audience of invited agents, casting directors and other industry professionals. This is something that always results in several future contracts.

In July the cover cast of Le nozze di Figaro presented an abridged performance at the Drapers' Hall, home of the Drapers' Company which has supported this year's production of Silver Birch. The accompaniment was provided by young artists making up a wind quintet and Garsington Opera's Head of Music, Susanna Stranders on the piano. The next day the same cast travelled to Corfu for Garsington Opera's first visit to the island, to reopen the Kopanous Theatre, an outdoor garden setting originally built for the 1973 Corfu Festival. This also presented an opportunity for our young production team to take on the responsibility for staging the performances.

The aim of the Alvarez Young Artists' Programme is to support the singers in their first professional steps and we are delighted that many of them return in future performances as soloists. This year we welcomed back alumni of our Young Artists' Programme singing principal roles including Jennifer France as Susanna, Marta Fontanals-Simmons as Cherubino and Andrew Tipple as Antonio in Le nozze di Figaro, Llio Evans as Iris in Semele and Katie Bray as Zaida in Il turco in Italia. Bradley Travis and James Way will sing principal roles in our specially commissioned people's opera Silver Birch.

Next month look out for a post from one of the young artists, going behind-the-scenes, describing their experiences during the 2017 Season.