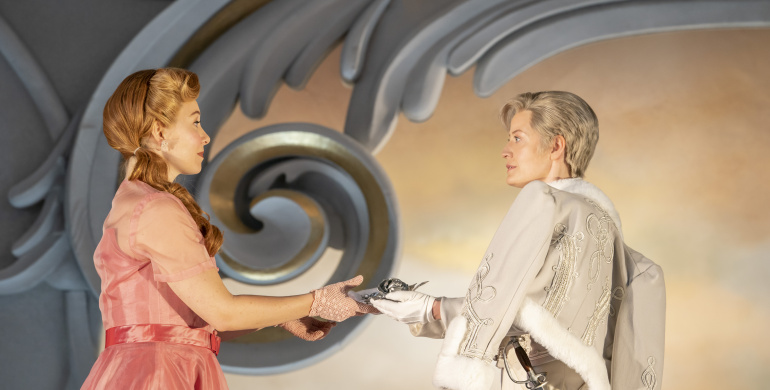 ★★★★★
"This Rosenkavalier is not only a tribute to the standards now achievable by the best of country house opera, but also to their resilience. Garsington is back with a show that’s a joy to the ears, and a feast for the eyes."
David Mellor, The Daily Mail, 5 June 2021

★★★★
"Bruno Ravella’s new production nailed the mix of fantasy, tender nostalgia and vulgarity that makes the work treasurable."
"The final scenes wring the heart as they should, helped by the radiant and rhythmically supple playing of the orchestra, under the hand of young Canadian conductor Jordan de Souza. He is clearly one to watch."
Ivan Hewett, The Telegraph, 3 June 2021

★★★★
"Persson is a most wonderful Marschallin, sounding and looking lovely, delivering both text and line with understated refinement, so that every word and emotional shift really register."
Tim Ashley, The Guardian, 3 June 2021

★★★★
"Opening the season at Garsington, Der Rosenkavalier feels like a glorious rebirth of lyrical pleasures."
"With Miah Persson radiant as the Marschallin, Hanna Hipp offering a strong-voiced Octavian and the young American soprano Madison Leonard dazzling as a wilful Sophie, the vital love triangle is poignantly conveyed."
Richard Morrison, The Times, 3 June 2021

"No UK production of the past 50 years, even Visconti’s at Covent Garden, has a comparable wow factor ... The cast is headed by the Swedish soprano Miah Persson, whose first Marschallin surpasses every expectation aroused by her Countess in Capriccio here three summers ago. To her silvery Mozartian tone she adds a patina of gold that recalls the great Viennese interpreters of the 1950s, Schwarzkopf, Della Casa and Jurinac, and she delivers the text and music with a truthfulness and sincerity that takes the breath away."
Hugh Canning, Sunday Times, 13 June

★★★★
"This company has come roaring back after the Covid closure, supercharged."
"Musically this is a perfect partnership, the warmth and colour of Hipp’s mezzo a delicious complement to Persson’s silvery soprano."
Stephen Pritchard, bachtrack, 7 June 2021

"There’s Hanna Hipp’s Octavian: as boyish as you like, channelling all that youthful verve into rich-toned, thrillingly ardent singing ... There’s Madison Leonard’s bouncy, debutante-ish Sophie, whose pearlescent soprano made a very believable vocal representation of a girl who believes she’s tumbled into a fairy tale, even after the rudest of comedowns. And of course there’s Persson, whose measured phrasing and ability to convey and then conceal intense emotion in the turn of a cadence was genuinely (and there’s no higher compliment in this role) aristocratic."
Richard Bratby, The Spectator, 12 June 2021

"Production designs by Gary McCann were spectacular and bold, especially in the finale which featured a breathtaking coup de théâtre at the Marchallin’s arrival, while Ravella’s solutions to the scenario’s blind alleys were unfailingly witty and resourceful."
Mark Valencia, Musical America, 4 June 2021

"Kathleen Wilkinson’s old nursemaid Filippyevna is a stunning portrayal, in every bar a creature of the Steppes, while Matthew Rose’s thunderous incarnation of Prince Gremin is a magnificent tour de force. Colin Judson’s solo as Triquet is as sweet as could be desired. Liz Ranken’s choreography ... has tremendous verve, as indeed has the whole evening. The chorus are in fine form."
Michael Church, The Independent, 6 June 2021

★★★★
"Moldovan soprano Natalia Tanasii, making her role, house and British opera debut, is a very exciting new talent. Her rich and creamy soprano, variety of expression, sensitive dynamics and dramatic subtlety make Tatyana's journey from girlhood to womanhood poignant and believable. Natalia Tanasii is a name to remember and to listen out for in future."
Claudia Pritchard, Culture Whisper, 7 June

"Douglas Boyd conducted a sensuous account of the score."
"It was baritone Jonathan McGovern who gave this Eugene Onegin its backbone with an account of the title role that bristled with intelligence and glowed with burnished vocal beauty."
Mark Valencia, Musical America, 4 June 2021

"Peasant harvesters enter from the facsimile of Lady Ottoline Morrell’s Garsington garden to the right (stage left) of the state-of-the-art pavilion and, splendidly led by a solo tenor (Dominick Felix), burst into song. The temptation is to burst into tears, for this is the first time, surely, any of us has heard a rich, full chorus live for over a year."
"From the pit, the Philharmonia players, a day after their Festival Hall triumph with Esa-Pekka Salonen, sound as lush as you could possibly want in Tchaikovsky’s glorious score."
David Nice, The Arts Desk, 6 June 2021

"Douglas Boyd gave Tchaikovsky’s glorious score a sensitive interpretation, showing great care for both the tempi and the singers ..."
"Moldovan soprano Natalia Tanasii was a terrific Tatyana. Her clear-voiced impetuosity in the letter scene turned to regretful resolve to follow her duty as the beautiful and intelligent wife of Prince Gremin, when Onegin reappears years later. Ms Tanasii well exhibited Tatyana’s solitary bookishness from the start, in stark contrast to the brilliant performance of British-Singaporean mezzo Fleur Barron as her more frivolous sister, Olga. Ms Barron was superb both on and off the ball, as they say in football, her facial expressions and seductively flippant bearing speaking volumes."
Mark Ronan, The Article, 14 June 2021

★★★★
"The mezzo Sonja Runje is outstanding in a title role, a natural in an unnatural genre, sustaining lines with smooth, resinous tone and moving nimbly. Rhian Lois is a bright, sparky Oriana, and their Act 3 duet is a poignant highlight of the score."
"The English Concert plays crisply under the conductor Christian Curnyn ... there is never a dull moment in this music."
John Allison, Daily Telegraph, 20 June 2021

★★★★
"Handel's magic opera casts its spell"
"In her new production for Garsington Opera, the director-designer Netia Jones puts on a winning show ... she gives us visual spectacle yet focuses on the central human drama"
Rebecca Franks, The Times, 21 June 2021

"Superb singing: Soprano Anna Devin invests Melissa with crackling fury opposite the silver-toned soprano Rhian Lois as Oriana"
"We should treasure the festival for glorious music such as this"
Michael Church, i News, 21 June 2021

"Handel’s inventive score receives high-quality presentation from the musicians of the period-instrument orchestra the English Concert, playing their first opera at Garsington, with conductor Christian Curnyn on firm, yet flexible, form."
George Hall, The Stage, 21 June 2021 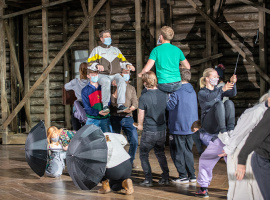