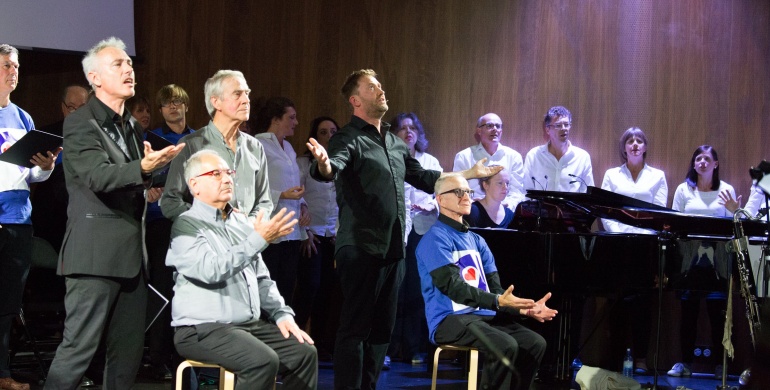 In 2017 Garsington Opera Learning & Participation delivered a major outreach project involving 85 participants, culminating in a performance at the Victoria and Albert Museum, watched by almost 10,000 people on Facebook Live and 250 at the venue in London. Hospital Passion Play, a new opera by Orlando Gough, was an exciting collaboration between the Garsington Adult Company, the Victoria and Albert Museum and the arts in health organisation, Rosetta Life. The project was performed as part of the V&A's new landmark exhibition, Opera: Passion, Power and Politics, which explores the story and origins of opera. The production involved live performance from three choirs alongside films of intimate performances from hospitals across London and Buckinghamshire. With a focus on the impact of the arts in health, the piece weaves stories of spinal injury rehabilitation into an opera, performed by members of the Stroke Survivors Choir, Shout at Cancer Choir and the Garsington Adult Company.

About the project
Phase One took place in Spring 2017 when our creative team worked with patients at the National Spinal Injuries Centre, exploring the theme of 'communication breakdown', developing text, and establishing an in-hospital singing group. Using the text created, based on the real-life stories of participants as survivors of spinal injuries, brain injuries and cancer, Orlando Gough composed the mini-opera during the summer.

Phase Two involved Autumn rehearsals, filming, and the V&A performance on 14 October 2017. The Adult Company spent seven sessions in Autumn rehearsing and staging the piece. Alongside this, a creative team, joined by five members of the Adult Company, attended weekly rehearsals with the choir at Stoke Mandeville Hospital. Their musical exerpts were filmed on 5 October and the footage was then incorporated into the live performance at the V&A.

We were thrilled to be part of this inspiring project and it has been a wonderful experience for all of us. Thank you for leading us through this project in such a considerate way, making us question our limitations and push our boundaries. Music, once more, has shown its power to unite. It was an amazing feeling to be with all those talented and enthusiastic musicians on stage.
Dr Thomas Moors, Shout at Cancer Choir